In Part 1, I laid out the essential tools you’ll want to gather to make your build experience as easy as possible. In this 2nd and final part, I’ll take you through the build step by step. Your build may take you 45 minutes to an hour or more depending on your experience. This guide assumes you are using our mil-spec lower parts kit as well as our upper and lower receivers and build kit parts.

The lower receiver is where most of the build time will be spent. Assembling the lower for a .22lr blaster is exactly the same as for any standard AR-15 build. There are lots of videos out there taking you through it step by step, however, you may want to look through our steps below if you are using one of our lower receivers since ours have some very nice time and labor saving features not found on most other lowers.

To begin, tighten your lower receiver magazine vise block into your vise and place your lower onto it. Now you’re ready to begin assembly. 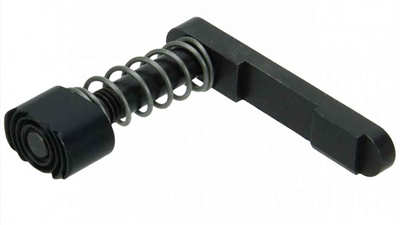 Use a pivot pin install tool! Any other attempt to install that little detent and spring will end up with you on your hands and knees wishing you had used the tool. 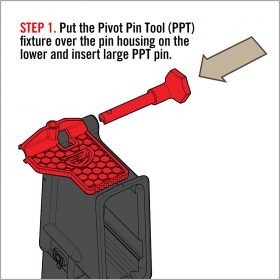 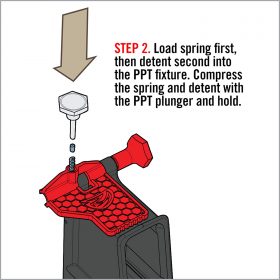 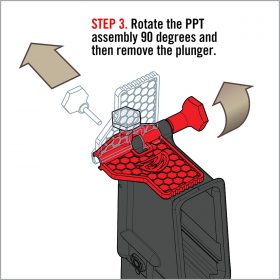 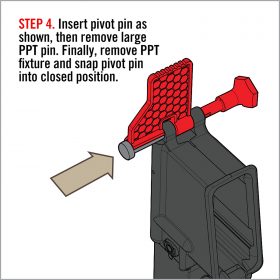 Here is where using our lower receiver becomes so much easier than the alternatives. Instead of using a roll pin, you’ll use the special dog set screw that came with your Canto Arms receiver. First, insert the bolt catch tension spring followed by the plunger into the recess. Then set the bolt stop into place. Now take your dog set screw and insert it into the hole, passing through the hole in the bolt stop. Tighten the set screw with an hex wrench. A ball-end hex wrench makes this job much easier and less prone to scratching your receiver while tightening.

The fire control system consists of two sub-assemblies: the trigger group and the hammer group.

Orient the trigger spring with the legs at the bottom facing front. Slip the spring’s crossbar under the front of the trigger and loop the spring over the studs on the side.

Drop the trigger assembly into the lower, lining up the holes in the receiver with the trigger holes. Now insert a trigger pin from the left side of the receiver, ungrooved end first. This will push out the slave pin.

Identify the front of the hammer – the flat side. The loops on the hammer spring slip over the studs on the side of the hammer with the open end of the spring to the front and the closed end to the rear.

Now insert the hammer into the receiver with the legs of the spring resting on the pin holding in the trigger. If necessary, gently drive the pin in place with a nylon hammer.

This step is important – skipping it will commonly result in misfires, double strikes, or other firing malfunctions.

Next, break-in the trigger and hammer reset by cocking the hammer, and pulling the trigger but keep the trigger fully pulled after the hammer drops. Cock the hammer, then release the trigger. You should hear a click as the disconnector catches the hammer. Often times with a new mil-spec fire control group the click will be delayed or not happen at all because the parts are not yet broken in.

After testing and break-in, remove the trigger test block and continue with assembly.

Another must-have tool is the Wheeler trigger guard install tool. It removes all the headache of this step eliminates the possibility of screwing up a perfectly good receiver.

A unique feature of our receivers is a receiver tensioning screw. This screw is optional to install as our receivers fit together fairly snug and do not rattle. Some receivers may fit more loosely and you will then notice a slight rattling which this screw resolves.

To install it, insert the tensioning screw green side up into the bottom of the receiver. Using a hex wrench, screw it into place until the green tip is flush with the inside of the receiver. If you think you may want to tension the receivers to keep them from rattling, install the empty upper receiver right now for fit, then turn the tensioning screw inward until it meets with the upper receiver and there is slight tension. Too much tension and you will have a very difficult time taking down the upper from the lower and an impossible time getting it back together.

That’s it for the lower receiver! You have some extra parts – the .22lr blaster pistol does not have a buffer tube so the buffer tube detent and spring are unused.

We recommend pre-polishing the chamber of the barrel as it can tend to be so snug from the factory that casings may not eject properly. This preparation is optional but easier to do before the blaster is assembled. To polish the chamber, chuck a brass .223 bore brush into an electric drill. Douse the brass brush with gun oil. With the drill on medium speed, run the brush up and down the chamber area repeatedly (20-30) times. Avoid going past the chamber into the barrel rifling. After polishing, thoroughly clean the entire barrel.

Note: Do not apply lubricant to the threads of the receiver or barrel nut.

If your kit has a two-piece barrel nut and shroud, slip the barrel shroud over the barrel, threads first, Hand tighten the shroud into the barrel nut until it will not turn any further. You may need to use a non-marring wrench or plier to tighten it all the way in, especially if you went too heavy with the VC-3. Mechanics gloves typically work well enough for tightening the shroud and the muzzle device.

Slip the crush washer onto the end of the barrel, cone facing rearward. Hand tighten the muzzle device onto the barrel. If you have a non-marring wrench, you may use that as well. However, do not overtighten with a wrench as the aluminum threads may strip.

Once the shroud and muzzle device are installed, remove the upper assembly from the vise block to continue.

Note: We have noticed that some of the CMMG bolts have not been fully seated into their rails during assembly at the factory. If you have trouble inserting your bolt assembly into the upper receiver, inspect the bolt assembly to see if it is correctly seated into its rails. You can easily test this by sliding the bolt back against the spring. If it will not slide, pull the frame apart gently and move the bolt into place in its rails. It will then be able to insert properly into the upper receiver.

To finish your build, tighten your lower receiver magazine vise block into your vise and place your lower onto it. Open both the takedown and the pivot pins. Set the upper receiver onto the lower and push in the front pivot pin. Then push in the rear takedown pin. Note that the RTB slick side upper receivers run on the tight side and a nylon hammer may be needed to drive the rear pin into place. This is normal and will loosen up a bit over time. Using lubrication on the pins when assembling is recommended.